Royal Durban Golf Club was first established in 1892 as the Durban Golf Club, after Mr John Watt (a local bank manager) approached the town council about creating a golf club in Durban and was granted permission to lay out a links design course on the grounds within Greyville Racecourse.

The first course was a far cry from the professionally landscaped grounds of today. There were no actual greens – only scuffed ground with hard clay surfaces – and the fairways were not planted, the grass was merely cut by a reaper drawn by oxen.

In 1932, the Durban Golf Club was rebuilt. A brand new clubhouse was built, replacing the original wood and iron shanty, and a new course layout was designed by Bob Grimsdell, who qualified as a course architect at Colt & Allison of London, Paris & New York. 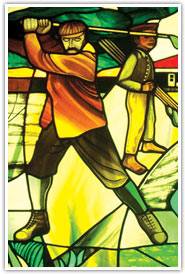 The course became known for its punishing rough, which is the only defense it has (apart from the prevailing winds). Large or bulky trees and bushes were not allowed in the design of the course, for the simple reason that they would obscure the view of the racetrack.

One of the proudest moments in the history of the club was on April 8, 1932 when (following a visit from Edward VIII, the then Prince of Wales, in 1925) Durban Golf Club was granted permission to use the prefix “Royal” by King George V, making it one of only four golf clubs in southern Africa to obtain this honour.

It was at this time that the Royal Durban Golf Club also designed and introduced their club badge, which is still used today. The motto “Ludus Palma Potior” has been officially translated as “the game supersedes the man”.

Royal Durban is one of the very few golf courses to be sited in the middle of a horse racing track and has hosted some renowned golfing tournaments in the last 100 years, including (most notably) the South African Championships in 1911 and the Commonwealth Tournament in 1975 which saw Nick Faldo playing at the tender age of eighteen. 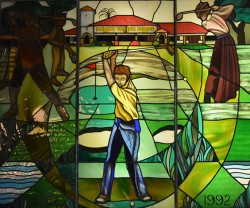 Some of our Historical achievements include: